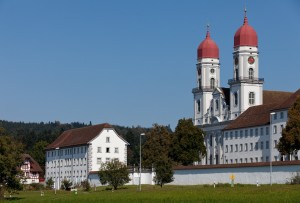 The Abbey of St. Urban today. The original structure in which Conrad lived is long gone.

Life Sketch
Abbot Conrad Zumbrunnen (or Konrad) was born in the mid- to late-1200s, the son of Arnold Zumbrunnen. According to some sources he was from the town of Brunnen, although this may be a mistaken assumption based off his name.

Joining the priesthood was a common vocation for young men from secondary lines of prominent families, as it offered a prestigious and highly-respected life. Conrad Zumbrunnen belonged to the St. Urban Abbey, which still exists. It is outside the city of Lucerne. Abbeys could be very powerful institutions and indeed over the course of the 1300s, when Conrad was a monk, the abbey acquired vast landholdings in central Switzerland.

Conrad became the Abbot of St. Urban in 1349 and remained so until 1356, which was likely when he died. Although Conrad had no children of his own, it was prestigious for families to have a cousin in a position as prestigious as that of Abbot.

There is a Conrad memorialized on February 20 in the yearbook of the St. Andreas Church in Attinghausen. It’s possible that this refers to Abbot Conrad but could also be his distant cousin Conrad Zumbrunnen who was a Knight in the Order of St. Lazarus.

Spouse: None
Children: None