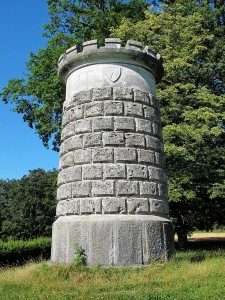 No details are known of his life, aside from his heroic death at the famous Battle of Laupen. A full account of this battle can be read here.

In brief: in the early 1300s, the city of Bern had asserted its independence from feudal tyrants like the Counts of Burgundy and the House of Hapsburg. In 1339, the Hapsburgs, the counts of Burgundy and other nobles laid siege to the town of Laupen. Bern called for help from the mountainous regions of Switzerland. Heinrich joined his cousin, Johann Von Attinghausen, and several thousand other men in marching to Bern’s relief. The men from Uri were outnumbered and the Hapsburgs were heavily armored. But the men of Uri, with superior tactics and valor, triumphed; the nobility in western Switzerland never really recovered from this defeat. But the men of Uri suffered heavy losses; Heinrich was among the fallen on that day of June 21, 1339.

He was regarded as a war hero in his homeland. His name is recorded multiple times in the Necrology of the Monastery of the Order of St. Lazarus. Every year, the church prayed for him on April 15 and May 18. His fall in battle appears to be the beginning of the tradition of naming men in the family Heinrich/Henry.

Spouse: Unknown
Children: Walter Zumbrunnen? (according to the Nobiliaire Militaire Suisse, he is Walter’s father, but according to other sources, Walter is the son of Johann Zumbrunnen, making him Heinrich’s nephew.)