The Ancient Necrologies of the Zumbrunnen and Attinghausen Families

Posted on September 21, 2017 by Josh Zumbrun
3 CommentsLeave a comment

One of the ways we know for certain that the Zumbrunnen were an important family even in the 1200s and 1300s is through their appearance in ancient church books, where they were memorialized for their donations to the church.

In the Middle Ages, when a wealthy person died they (or their family) would often make a donation of property or wealth to the Catholic Church. The churches, in return, would record the names of these beneficiaries in large beautiful books, where each donor was assigned a day of the year. These books, which were zealously protected by their churches over the centuries, were known as Jahrzeitbuch (in German) and liber anniversarum or martyrologium (in Latin). In English, they are often called Necrologies or simply Yearbooks.

In exchange for these large donations, the priests of the church would consult the Necrology throughout the year and pray for the benefactors on their designated date. It is in part through this practice of donating land in exchange for a place in the necrology that the Catholic Church came to own the rights to huge swaths of land across the Holy Roman Empire. Below is a scan of one of the pages from the Necrology for the Monastery of the Order of St. Lazarus, to show what they looked like. 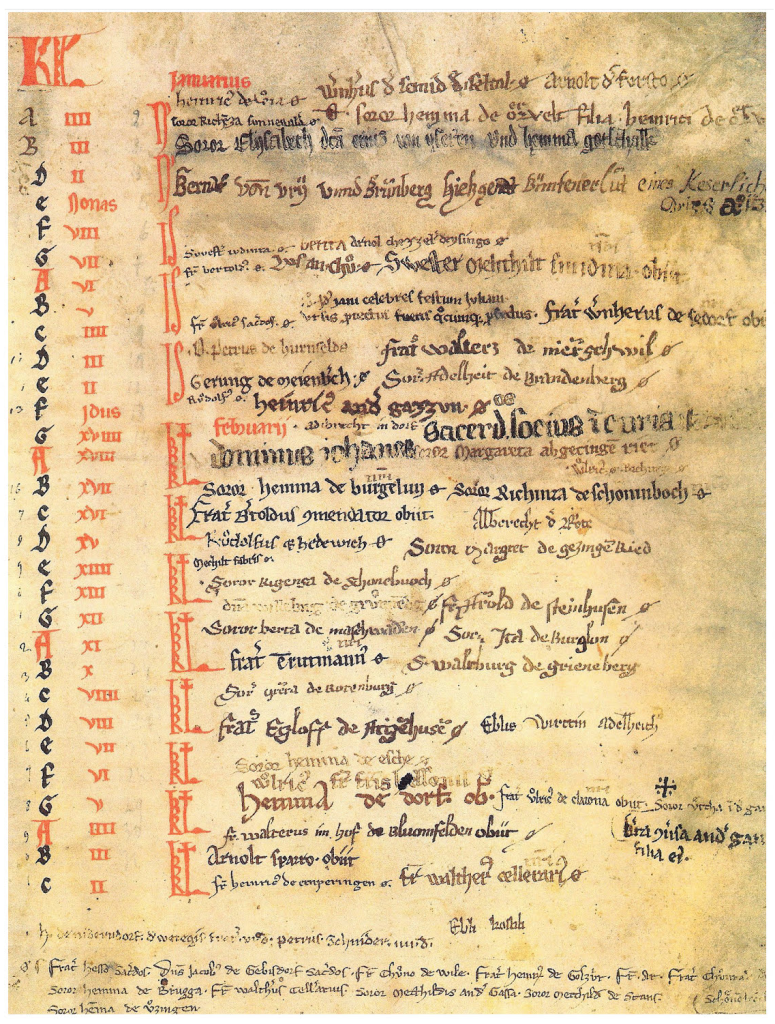 Sadly, no Zumbrunnen are on the page I’ve found an image of! A full facsimile of this beautiful book is available at some European libraries. It’s quite difficult to make sense of, isn’t vigilant about spelling, was clearly added to over time, and is written in a sort of German-Latin pidgin (for example, the Zumbrunnen sometimes have their names as “Zum Brunnen” or “Zem Brunnen” or “Ze Dem Brunnen” or even translated literally into Latin as Ad Fontem meaning “to the fountain”). One name you can clearly make out in fairly large letters, on the seventh line from the bottom, is “Frat. Egloff de Atighuse”

The purpose of these books was Ecclesiastical, not Genealogical, and so they generally don’t record all the information we wish they would. For one thing, they don’t even record the year that a person died — the purpose of the book was only to pray for their immortal soul every year in the future on that date. So, to take the first example below, on January 31 of each year, the priest might say to his congregation: “Today we pray for Mechtilda Zum Brunnen and Berchta von Attinghausen. Eternal rest, grant unto them, O Lord, and let perpetual light shine upon them. May the souls of the faithful departed through the mercy of God rest in peace. Amen.”

The books are still fascinating for genealogists. They are often the oldest original surviving documents from ancient ancestors. At least two yearbooks, with entries from the 1100s to the 1300s, survive for our family — yearbooks for the Monastery of the Order of St. Lazarus and the ancient church of St. Andreas in Attinghausen.

The books have been transcribed by historians who don’t provide information on what most of the notations mean. The lists below draw on the transcriptions. (My own commentary, provided for context, is in parentheses and highlights like this) Below are all the entries for our ancestors; there are more entries than this but the Zumbrunnen and Attinghausen do make up a fairly large share.

The Necrology of the Monastery of St. Lazarus in Seedorf

This is likely the older of the two yearbooks, possibly dating to the church’s founding in the early 1100s. I don’t know if a facsimile of it is readily available somewhere.

The Necrology of the St. Andreas Church in Attinghausen

January 5 – Voli von Schweinsberg
January 15 – Cuonrads des sigriften von Attighusen
January 18 – Walther Zem Brunnen was hie Landammann, und Ita fin Huffrow et omnium puerorum
February 20 – Cuonrad ze dem brunnen (This could be Conrad Zumbrunnen the knight, or Conrad the Abbot.)
Cuonrad ze dem brunnen
March 1 – Her Diethelms von Attighusen
March 23 – Frow Hemmon Her Wernhers ana von Attighusen (Another entry for a Werner Von Attinghausen and his ancestor (or perhaps grandmother) who was named Hemmon or Hemma.)
April 23 – Her Eglofs von Schweinsberg
April 27 – Her Heinricus von Attighusen
May 9 – Dorade Beroldinger, was ammen zum brunnen feligen Huffrow (One interpretation of this note might be that Dorothea Beroldinger was the second wife of Walter Zumbrunnen. But I think the Ammann Zumbrunnen may well refer to Landammann Burkhard Zumbrunnen, who was so closely identified with his office.)
June 7 – Her Vuolrichs von Attighusen, was der Herren vatter
July 15 – Frow Berchton von Attighusen
August 13 – Her Wernhers von Attighusen, unnd Landamman ze Vre (as all four men named Werner Von Attinghausen are all thought to have been Landammann, it’s hard to know which one this is meant to refer to)
August 15. Herrn Rudolfs von Attighusen
September 3 – Rudolf ze dem Brunnen. (I do not know where Rudolf Zumbrunnen fits in the family tree.) Herrn Uolrichs der Herren Bruder von Attighusen
September 21 – Her Uolrich von Attighusen
October 3 – Agnesen von Wallis, Eglofs von Attighusen wirtin.
October 31 -Her Wenhers von Attinghusen Ritter (it’s hard to know which Werner this refers to, but as this is an old styling of his title, it suggests it could be the first Werner.)
November 7 Johanns Her Eglofs sun von Attighusen
November 11. Her Albrechts von Attighusen
November 14. Frow Elsbeth von Kempten, was her Diethelmds frow von Attighusen.
November 17. Frow Betchen von Attighusen, Her Eglofs tochter. (This note seems to suggest that this Bertha Von Attinghausen was the daughter of Egloff and likely named after her ancestor, the Lady Bertha. That she is identified as a Frow and not a Domina (lady) further suggests the distinction.)
November 26. Herr Lamprechts eins ritters von Attighusen