The Last Will and Testament of Johann Zumbrun, 1819

Posted on July 9, 2017 by Josh Zumbrun
1 CommentLeave a comment

The last will and testament of our ancestor Johann Zumbrun (or John) is on file with the Maryland Register of Wills. Nearly all the Zumbruns who live in America are descended from Johann and his large family.

While at this point we know almost nothing about Johann’s early life, we know from this document that he became a prosperous farmer in northern Maryland, owning about 240 acres of farmland. His farms had been given colorful names: “Brotherly Love,” “Brooks Discovery on the Rich Lands,” “Brooks Second Discovery on the Rich Lands,” “Ebon Forest,” “Neglect” and “Watson’s Delight.”

The original is handwritten and in places very difficult to read, so I have transcribed it below!

It seems Johann Zumbrun did not care for his son-in-law Jacob Hiteshew, who had married his daughter Magdalena. Johann didn’t want to cut Magdalena out of his will entirely, but apparently wanted to keep Jacob’s hands off his money. He specifies in his will that her share of the inheritance was to be held in trust for as long as Jacob Hiteshew was alive, and only after Jacob died would she receive her ninth of the inheritance. Ouch.

His entire will is transcribed below. In addition to the colorful farm names, and the revealed bit of family drama, it’s amusing to read that era’s legalese.

In the name of God, Amen. John Zumbrun of Frederick County and State of Maryland, being indisposed and weak in body, but of sound and disposing mind memory and understanding; and considering the certainty of death and the uncertainty of the time thereof and being desirous to settle my worldly affairs and thereby be the better prepared to leave this world where it shall please God to call me hence, do therefore make and publish this, my last will and testament, in manner and form following.

That is to say first and principally, I commit my soul into the hands of the Almighty God and my body to the earth to be decently buried at the discretion of my Executors hereinafter named, and after my debts and funeral charts are paid, I devise and bequeath as follows; __

I give and bequeath to my dear and beloved wife Elizabeth during her natural life the farm or tract of land on which I now live, being part of a tract of land called “Brotherly Love” and part of “Brooks Discovery on the Rich Lands” and part of “Ebon Forest”  and part of “Neglect” the whole containing about eighty acres of land, more or less, and after my said wife’s decease it is my will and pleasure that the said tract of land be sold at public auction by my Executor hereinafter named or the survivor of them as soon after my decease as conveniently may be, and the proceeds of the sale thereof to be divided, and disposed of as hereinafter directed.__

Items, I give and bequeath unto my said wife, one good feather bed bedstead and bedding, two hogs, two cows, two sheep, all the poultry and one third of the proceeds of all other my personal property, which said personal property, I hereby request and direct shall be sold at public sale by my said Executors or the survivors of them it being however my express wish and intention and do so declare it that the aforesaid gifts and bequests to my said wife are to be considered and understood as being instead and in lieu of the dower or thirds which she my said wife is or may be entitled, to by law of in or to my estate both real and personal.__

And whereas I am possessed of and siezed in fee of in and to one other tract of land lying and being also in the Country and State aforesaid being part of a tract of land called “Brookes Discovery on the Rich Lands” and part of “Brookes Second Discovery on the Rich Lands” and part of “Watson’s Delight,” containing about one hundred and sixty acres of land more or less. It is my will and pleasure that the same be sold by my executors or either of them herein after named at public auction as soon as conveniently can be after my decease and the proceeds of the sale thereof to be divided and disposed of as hereinafter directed to wit.__

Items I give and bequeath unto my daughter Magdaline Hiteshew, wife of Jacob Hiteshew, one equal ninth part of the proceeds of the sale of the two tracts of land above described and directed to be sold, and one equal ninth part of the proceeds of the sale of all and singular the rest of my personal property not herein before disposed of, during her life only and after her death the whole to her children to be equally divided among them but under this express condition nevertheless that my daughter Magdalena’s ninth part shall be held in trust by my executors or the survivor of them for her use and shall be and remain in their or his hands or such person or persons as they shall deem proper and interest and the profits thereof during his the said Jacob Hiteshew’s life, to be paid over to the said Magdalena Hiteshew, and her receipts and discharges therefor to my executors shall be good and sufficient. 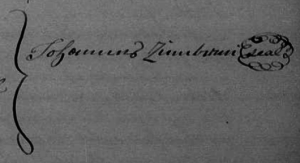 The signature on his will. He used English “John Zumbrun” in his will, land records, and the Census, but it’s interesting that for his signature he still used the German spelling Johannes.

And lastly I do hereby constitute and appoint my worthy friend Abraham Null and my beloved son Jacob Zumbrun executors of this my last will and testament. hereby authorizing and empowering my said executors, the two aforesaid tracts of land and property as above described, according to the terms and conditions and meaning of these presents to sell dispose of grant and convey in fee to such person or persons and on such terms and conditions as they in their judgments and discretion shall think fit and expedient, hereby allowing to them my said executors for their services such sum or sums to be had and made out of my property as may be thought reasonable and just.In testimony whereof I have hereunto set my hand and affixed my seal this thirtieth day of October in the year of our Lord Eighteen Hundred and Nineteen–

Three men signed the will as witnesses.

Signed, sealed, published and declared by John Zumbrun the above named Testator as and for his last will and testament in the presence of us who at his request in his presence and in the presence of each other have subscribed our names as witness thereto–

John Zumbrun signed this will on October 30 of 1819, and by December 6th of that year had died. The Register of Wills includes the following note along with his will.

On the 6th day of December 1819, there came Abraham Null & Jacob Zumbrun and made Oath on the Holy Evangely of Almighty God that the foregoing instrument of writing is the true, whole will and testament of John Zumbrun, late of Frederick County deceased, that hath come to their hands and possession and that they do not know of any other.

Some questions for further research