Original Sources: the Passenger List and Ship Registry for the Ship “Brothers” 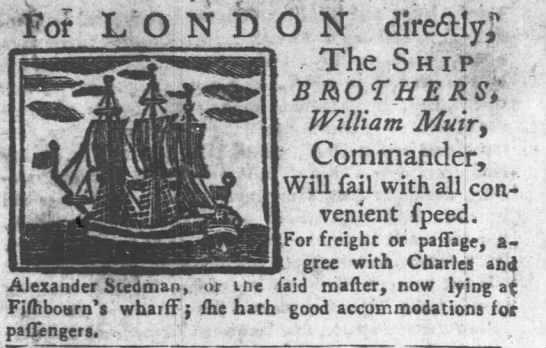 If you’ve researched Zumbrun genealogy much you may have stumbled across some of these ship records, and not totally known what to make of them due to some unusual terminology and the fact they’re often presented without much context. Information about the ship “Brothers” and its voyages is posted in a few places online, but with some errors in the descriptions. This post is meant to explain the full context behind these records. 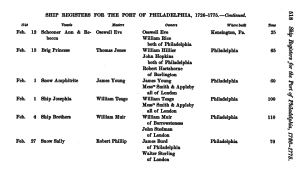 The ship “Brothers” registered in 1749

“Brothers” was a 110-ton ship, built in Philadelphia. It was co-owned by its captain, William Muir of Borrowstoness, and John Stedman of London, according to the ship registers in the Port of Philadelphia. Stedman, along with his brothers Charles and Alex were prominent shipping magnates in Philadelphia.

The ship submitted several pieces of paperwork each time it arrived in Philadelphia. “Brothers” made the Trans-Atlantic voyage at least 5 times, from 1750 to 1754. On all five journeys the ship sailed from Rotterdam, made a last call at Cowes on the Isle of Wight (to restock supplies and pay various customs) in England and then sailed for America. Departure dates are available from either Rotterdam or Cowes.

For a narrative account of Heinrich’s journey, read this post:
The Voyage of Heinrich Zumbrun, the First Zumbrun in America

When it first arrived at port, doctors inspected the passengers to make sure they didn’t have any infectious diseases. Sick immigrants had to remain on ship a few days, or go to a nearby hospital (on an island named Fisher Island which no longer exists and is part of the Philadelphia Airport), until they were well enough to enter. The immigrants on the subsequent lists were thus healthy (at least to the eye) upon their arrival in Philadelphia. For its 1754 voyage, “Brothers” was inspected the same day as another ship named “Edinburgh.”

This was the medical certification on September 30, 1754:

We have carefully examined the State of Health of the Mariners and Passengers on board the Ships Brothers & Edinburgh, Capts Muir & Russel and found no objection to their being admitted to land in the City immediately.

To his Honour
The Governour
Tho. Graeme
Th. Bond

For the 1754 voyage all three of the required lists remain (for many other immigrant ships, some or all of these lists are lost).

The first list was compiled by Captain Muir. He was Scottish and so his List A probably gives an idea of what the names sounded like to him. Therefore, for example, “Sombroun” is likely a phonetic spelling of how Heinrich Zumbrun pronounced his name. The captain also listed their ages.

The second and third lists are, in fact, a transcribed list of these men’s signatures that were taken at the Pennsylvania State House immediately after they left their ship. You can see a facsimile of the original signatures here, pages 705-708. The parentheses indicate someone who was illiterate and therefore gave their name to a clerk and signed with their mark or initial.

The first (List B) was an oath of loyalty to England and the second (List C) an oath of abjuration from the Pope and from the Stuart pretenders. (Women and children didn’t have to sign.) This wasn’t a disavowal of the Pope, per se, but rather a list of instructions like that you couldn’t kill someone on the pope’s behalf. I included the full text of the oaths at the very bottom of this post for those curious.

The differences in spelling between List B and List C are largely attributable to sloppy handwriting resulting in different transcriptions. The order of names is just literally the order in which the men walked off the boat and through the clerk’s office. This is sometimes significant; when groups of people traveled together, their leader (often a pastor) went first.

At the top of List C the following information was recorded about the ship:

At the State House of Philadelphia, Monday, the 30th September, 1754
Present: The Worshipful Charles Willing, Esquire, Mayor
The Foreigners whose Names are underwritten, imported in the Ship Brothers, Captn William Muir, from Rotterdam and last from Cowes, did this day take the usual Qualifications. 7 Roman Catholicks. 23 Mennonites. 250 Souls. 210 Freights. 101 Qualified. Palatinate & Mentz.

The “101 Qualified” is the number of healthy men. The “210 freights” is the number of paying adult men and women who made the journey, meaning there was a total of 109 paying customers who were women, sick men or older children. And 250 is the number of total passengers (thus this ship had 40 young children who arrived). Only the adult men were recorded in these lists.

Here are the three lists. The men on board the ship remained in their line.

List B was signatures attached to this (it’s unclear to me whether a process was in place to translate this or if the immigrants were ready to sign anything at this point) Oath of Loyalty to King George II:

We Subscribers, Natives and Late Inhabitants of the Palatinate upon the Rhine & Places adjacent, having transported ourselves and Families into this Province of Pensilvania, a Colony subject to the Crown of Great Britain, in hopes and Expectation of finding a Retreat & peaceable Settlement therein, Do Solemnly promise & Engage, that We will be faithful & bear true Allegiance to his present MAJESTY KING GEORGE THE SECOND, and his Successors, Kings of Great Britain, and will be faithful to the Proprietor of this Province; And that we will demean ourselves peaceably to all His said Majesties Subjects, and strictly observe & conform to the Laws of England and of this Province, to the utmost of our Power and best of our understanding.”

For List C there were two oaths, reproduced verbatim below. The first, an abjuration from the Pope:

I A B do solemly & sincerely promise & declare that I will be true & faithful to King George the Second and do solemnly sincerely and truly Profess Testifie & Declare that I do from my Heart abhor, detest & renounce as impious & heretical that wicked Doctrine & Position that Princes Excommunicated or deprived by the Pope or any Authority of the See of Rome may be deposed or murthered by their Subjects or any other whatsoever. And I do declare that no Forreign Prince Person Prelate State or Potentate hath or ought to have any Power Jurisdiction Superiority Preeminence or Authority Ecclesiastical or Spiritual within the Realm of Great Britain or the Dominions thereunto belonging.

The second of the List C oaths, which was an abjuration from the Stuart pretenders. Even if this one were translated into German, it’s hard to imagine our immigrants having any clue what to make of it:

I A B do solemnly sincerely and truly acknowledge profess testify & declare that King George the Second is lawful & rightful King of the Realm of Great Britain & of all others his Dominions & Countries thereunto belonging, And I do solemnly & sincerely declare that I do believe the Person pretending to be the Prince of Wales during the Life of the late King James, and since his Decease pretending to be & taking upon himself the Stile & Title of King of England by the Name of James the third, or of Scotland by the Name of James the Eighth or the Stile & Title of King of Great Britain hath not any Right or Title whatsoever to the Crown of the Realm of Great Britain, nor any other the Dominions thereunto belonging. And I do renounce & refuse any Allegiance or obedience to him & do solemnly promise that I will be true and faithful, & bear true allegiance to King George the Second & to him will be faithful against all traiterous Conspiracies & attempts whatsoever which shall be made against his Person Crown & Dignity & I will do my best Endeavours to disclose & make known to King George the Second & his Successors all Treasons and traiterous Conspiracies which I shall Know to be made against him or any of them. And I will be true & faithful to the Succesion of the Crown against him the said James & all other Persons whatsoever as the same is & stands settled by An Act Entituled An Act declaring the Rights & Liberties of the Subject & settling the Succession of the Crown to the late Quenn Anne & the Heirs of her Body being Protestants, and as the same by one other Act Entituled an Act for the further Limitation of the Crown & better securing the Rights & Liberties of the subject is & stands settled & entailed after the Decease of the said late Queen, * for Default of Issue of the said late Queen, to the late Princess Sophia Electoress & Dutchess Dowager of Hanover & the Heirs of her Body being Protestants; and all these things I do plainly & sincerely acknowledge promise & declare according to these express Words by me spoken & according to the plain & common Sense and understanding of the same Words, without any Equivocation mental Evasion or secret Reservation whatsoever. And I do make this Recognition Acknowledgment Renunciation & Promise heartily willingly & truly.