The Oldest Genealogy of the Zumbrunnen by Gabriel Bucelin

Posted on September 5, 2017 by Josh Zumbrun
1 CommentLeave a comment 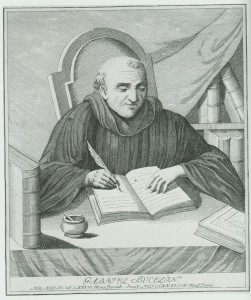 The Benedictine monk Gabriel Bucelin, who published a genealogy of the Zumbrunnen family in 1678

In the mid-1600s, a Benedictine monk named Gabriel Bucelin compiled numerous genealogies of prominent German-speaking families. I had seen references that Bucelin wrote a genealogy of the Zumbrunnen family, but it took me quite awhile to find it (Bucelin wrote in Latin and I can’t read Latin).

One of Bucelin’s works is called “Germania topo-chrono-stemmato-graphica sacra et prophana” published in 1678, containing thousands of genealogical entries. Each volume of the sprawling work runs for hundreds of pages. I finally located the Zumbrunnen entry in Volume 4, page 48. There’s no copyright for works this old so I’ll just post the page in its entirety, as there’s actually a sort of beauty in manuscripts this old.

I have no idea how Bucelin could have compiled this work in the 1600s. A later historian named Theodor Von Liebenau described Bucelin as an “uncritical genealogist.” I assume this means that Bucelin wrote to archivists and historians (or the families themselves) for the information and passed along whatever he received, even though some of it was inaccurate.

But, for the Zumbrunnen at least, his genealogy largely matches the family tree that I’ve compiled with the help of the modern internet, digital archives and years of research on just one family. (Even without knowing any Latin, it’s easy to pick out the Zumbrunnen names.) Perhaps the Zumbrunnen family had kept track of this information in the 1500s and 1600s, written down in family bibles, and shared it with Bucelin? It seems inconceivable that he could have combed through the local church records or ancient feudal records that largely verify his 400-year genealogy of the Zumbrunnen family, and it’s unclear who else would have maintained such records.

If anyone knows anything about Bucelin’s methods, or knows enough Latin to completely translate this document, I would be most interested. 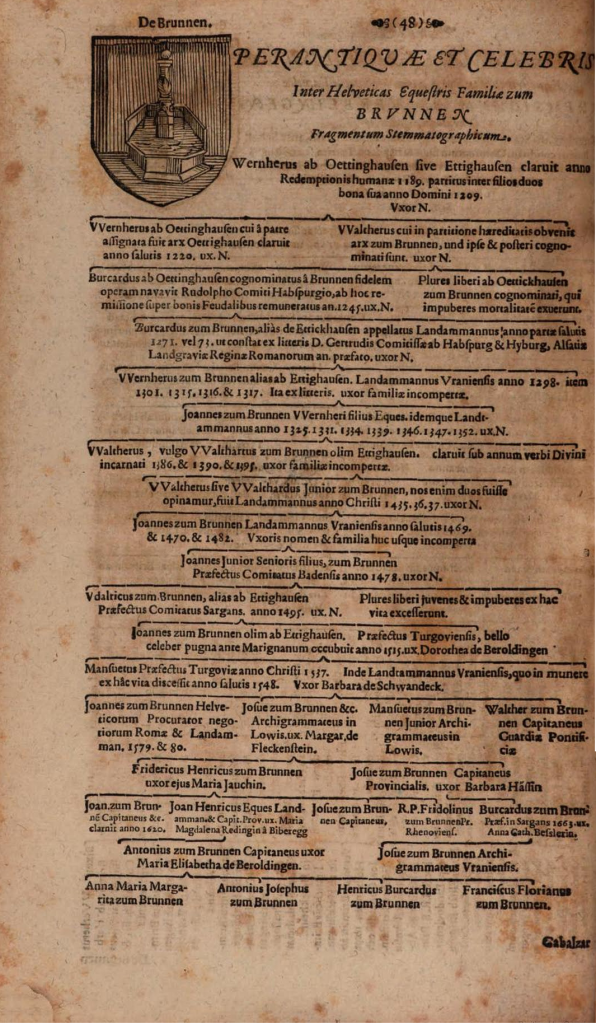 Bucelin’s genealogy of the Zumbrunnen family, published in 1678