The Origin of the Barons of Attinghausen

Posted on September 12, 2017 by Josh Zumbrun
6 CommentsLeave a comment

But who were the ancient Attinghausens? There are some undisputed facts, and then two basic theories about their origin. It’s unlikely the answer can ever be fully known, with just too much lost in the mists (and fires) of time. 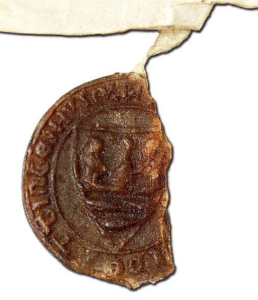 The seal of Werner Von Attinghausen dated to a letter from October 19, 1264. Clockwise from bottom are the letters “DE — TTINGENHVSEN” (the full seal said Wernheri De Attingenhvsen).


Undisputed Facts
The Attinghausens were the only members of the upper nobility in the Canton of Uri where they occupied the Attinghausen Castle. Much of the land in Uri was owned by the great church the Fraumünster of Zürich, but the Barons of Attinghausen held this land as fiefs. They also owned much land outright.

Beginning in the mid-1200s, the family is very well-documented. One example is the seal at right, attached to a letter that Werner Von Attinghausen sent in October 19, 1264. (There were several generations of men in the family named Werner, so it’s not always clear which is which.)

By the mid-1200s, and possibly earlier, the Von Attinghausen family was also known as Von Schweinsberg and controlled several castles near Bern that are now completely ruined. (Their landholdings in Bern were specifically in a valley called Emmental, which is now famous for its cheese.) The name Von Schweinsberg seems to have originated in Bavaria, Germany. 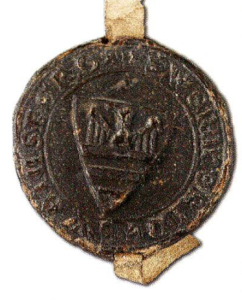 A seal of Werner Von Attinghausen from November 19, 1303. Clockwise from the top it says “S. WERNHERI DE SWEINSBERG”

It was somewhat unusual for a family to control two disconnected regions as far apart as this. When the family was in the Canton of Uri they called themselves Von Attinghausen, and when they were near Bern they called themselves Von Schweinsberg. It’s certain that, by the time of Ulrich Von Attinghausen/Von Schweinsberg in 1240, they controlled both far-flung estates.

The Von Attinghausen branch of the family became pivotal figures in the creation of an independent Switzerland. The male line of both branches died off over the next century or so.

Of the above facts, there is no dispute. The question is: where did this family come from originally and how did they acquire two baronies that were so far apart from each other? 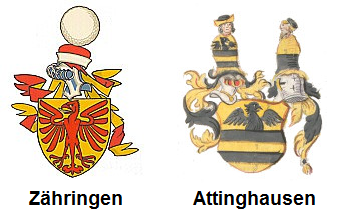 The coats of arms of the Zähringen and Attinghausen family have some similarities: an eagle with his wings extended and tongue out, although this was a common motif in the Holy Roman Empire.

In 1173, the Dukes of Zähringen also were granted administrative responsibilities for the valley of Uri.

Thus one hypothesis is that the original Barons of Attinghausen were loyal knights of the Zähringen who were given the newly created barony of Attinghausen, possibly as an award for valorous military service (often the basis for awarding new baronies) and also because they could be trusted to act on the behalf of their sponsors.

One family in particular has been identified: a family named Von Signau who lived near Bern. Several facts support this theory:

Thus if this theory is correct, a descendant of Werner Von Signau distinguished himself with valorous service to the Dukes of Zähringen and was awarded the Barony of Attinghausen in addition to his lands near Bern, perhaps around 1173. As the deputy of the dukes he was thus an outsider who came to Uri, set himself up in the mighty castle, and retained his power even after Berthold V, the last Duke of Zähringen, died in 1218. 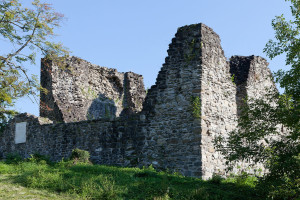 The other theory is that the Barons of Attinghausen were a family with deep and ancient local ties. Uri was very remote in the Middle Ages, primarily accessible via Lake Lucerne, and not easily reached via land. The mountain pass from Uri to Italy, known as the Gotthard Pass, was accessible only via a treacherous footpath. The first bridge was not constructed until 1220, so it was not yet an important trade route.

In antiquity, Uri was under the rule of the Roman Empire, part of the Roman province of Maxima Sequanorum. But as the Roman Empire collapsed, the tribe of the Alemanni swept in. The archaeological record suggests this was the last major colonization of the valley.

Thus the second theory is that the Barons of Attinghausen were the leading local family who were elevated to barons, perhaps because this was far easier than sending someone in to attempt to displace them. (The historian Theodor Von Liebenau speculates the family could have been awarded a barony in their homeland for serving Emperor Frederick I in his campaigns against Italy.) 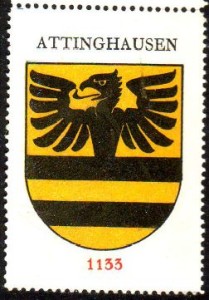 Another version of the Attinghausen coat of arms.

Several facts support the theory of an ancient, local family:

Thus if this theory is correct, a leader of the men in Uri built a powerful castle in a remote alpine valley, and through service to the emperor (or as the only expedient way to control Uri) was elevated to baron. His family then married an heiress to the Von Signau and acquired lands near Bern as well. But the Barons remained more loyal to their kinsman than to other nobles, and helped establish the independence of central Switzerland.


So Which Theory Is Right?
Old historians like Von Liebenau and Girard believed the Barons of Attinghausen were an ancient family from Uri. For much of the 20th century, many historians favored the hypothesis that they were colonizing members of the Von Signau family. But the most recent excavations, suggesting such an early construction date for the castle, also favors the theory that the Attinghausen’s were an ancient family from Uri.

It is likely that this fascinating debate can never be decisively resolved.

Edit: In initially conducting this research, I thought the evidence was somewhat stronger that the Barons of Attinghausen were an ancient family from Uri who married a Von Signau heiress. I said it was likely that this fascinating debate can never be decisively resolved.

But after writing this post, Ulysse Ulrich Schnegg Zumbrunnen, who lives in Switzerland and has researched the family in great detail, writes that the “Colonizing Nobles theory” is the correct one. He says that while an earlier family indeed inhabited the castle, they likely died off, and the Von Signau came in and took their name. I have included his comment here so that people do not miss it!

To the people of Uri it is clear that the von Attinghausen / von Schweinsberg family arrived from the Emmental.

That plot of land had been under control of the Barons von Signau.

The von Signau family was closely linked to the Counts von Kyburg, von Habsburg and the Dukes von Teck and Zähringen.

The inhabitants of the original Burg Attinghausen don‘t seem to be linked to this family directly. They are unknown and must have become extinct.

Note: I have used the date 1209 on this blog because it appears to be when the name Zumbrunnen first came into use. I certainly agree with Ulysse that “the family” came into existence before this date.