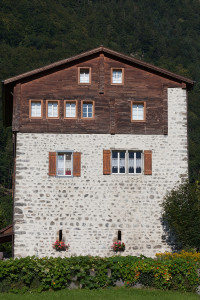 The entry on the Attinghausen family in the Nobiliaire Militaire Suisse also contains a genealogy of the Barons of Schweinsberg and the Der Frauen.

Like the Zumbrunnen, the Von Schweinsberg family and the Der Frauen family descend from the Barons of Attinghausen, although they broke off from the main branch of the family several generations after the Zumbrunnen did. Diethelm von Schweinsberg, at the beginning of this genealogy, would have been a second cousin of Burkhard Zumbrunnen II. The Der-Frauen are even more distant cousins.

The Schweinsberg Castle, seen here, is located in Attinghausen only about a quarter mile away from Attinghausen Castle. The Von Schweinsberg used the name of this castle, even though they relocated to the town of Signau which is a little bit east of Bern. (For a map of these locations, see here.)

What follows is a direct translation of the original encyclopedia entry. (My own commentary, provided for context, is in parentheses and highlights like this) The original is on Google Books and any improvements to the translation would be welcomed.

Werner von Attinghausen is one of the founders of the House of Schweinsberg through Diethelm of Attinghausen, his grandson. And he is the founder of the Zumbrunnen, through his second son Walter who took the name of a castle that he inherited. He is also the founder of a third branch, Der-Frauen, but we do not know its junction with the other branches.

Before establishing the descendancy of the Attinghausen, I think it necessary to give a brief idea of the two branches of Schweinsberg and Der-Frauen, which are too small to make into separate articles.

The Barons of Schweinsberg lasted only a few generations. They took their name from a castle near Attinghausen.

Diethelm von Schweinsberg, of whom we have spoken, lived at the end of the 12th century. He was the arbitrator of a dispute between the Abbey of Seedorf and Lord Conrad Stuhlsaes in 1296. His wife was Elizabeth of Kemten.

Rudolf von Schweinsberg witnessed the conclusion of the peace treaty in 1350 between the Canton of Schwyz and the Einseideln Abbey.(This abbey was an important landholder and after the major churches of Zurich, one of the most important cultural institution in central Switzerland at the time.)

Like their ancestors, the Von Schweinsbergs originally favored the enterprises of our fathers, they were faithful to their country and zealous partisans of Swiss liberty. But the acquisition of a few fiefs and the seductive favors of the princes, which were spread over the family, made them forget their loyalties. They abandoned the Canton of Uri and fixed their dwelling near Signau, in a castle of their own name. They embraced the House of Kyburg, the enemy of the Swiss, and had the sorrow of seeing their castle reduced to ashes by the Bernese and the Solorians in 1383.

They must, however, have reconciled themselves with the Swiss, because Thuring Von Schweinsberg and his sister Anastasia were burghers of Bern at the beginning of the 15th century.(Burghers were basically full residents of a city. They were something like an upper middle class, but certainly something less than nobility.) In 1374, Thuring ceded the right of patronage over the Church of Trachselwald to the teutonic commander of Summiswald. In 1403, he was the Lord of Ruedersweil.

The nobles Der-Frauen, which some records call Barons, remained constantly loyal to their country.

Conrad Der-Frauen was chief magistrate (the Swiss title Landammann) of the canton in 1374, captain general in 1386, commanded the Uri at the Battle of Sempach on July 9, a battle in which he lost his life gloriously. He left two sons, Heinrich and Conrad.

Heinrich was a member of the noble Brotherhood of St. Lazarus of Seedorf, who was chief magistrate in 1391 and 1405

Conrad was a member of the same Brotherhood who, with his relative Conon, was killed in the Battle of Belinzona against the Count of Carmagnola, the general of the Duke of Milan.

Jacob, who lived at the beginning of the 16th century married Dorothea Schmid of Uri, daughter of Ludwig and Catherine de Mentlen, widow of Captain Joff Jauch.

Jacob, 2nd of the name, Counselor of Altdorf, may be Conrad’s son. He was bailiff (the Swiss title Landvogt) of Livinen in 1511. In 1550 he married Barbe Arnold de Sprinigen, daughter of Heinrich and Anne Fries, widow of Martin Zwyer of Evebach. (so it seems he was either a very young Landvogt or a very old groom.)

About the same time, Benedicta Der Frauen married Johann Puntener of Brunnberg, captain general of the Uri, from whom all the branches of this illustrious family descend. (Genealogy of the Houses of Schmid of Uri, of Mentlent, of Puntener. See also the work of the genealogy of Mr. Imhof of Blumenfeld later in this work.)