Translating the Attinghausen entry in the Nobiliaire Militaire Suisse 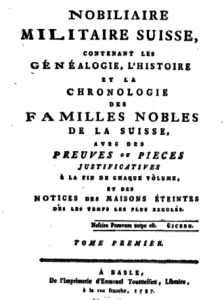 The Nobiliaire Militaire Suisse was an incredibly ambitious effort by an Abbot named Jean-François Girard in the 1700s to compile genealogies of aristocratic Swiss military families. Too ambitious in fact. The first volume, published in 1787, was over 700 pages. It documented 50 families from Aa-Ayent in extensive detail.

Sadly for families B-Z, the author never finished even the second volume, let alone all 26. But luckily for us, he did document our ancestors because (in a rare example of our family benefiting from alphabetical order) he included them in the entry for the Attinghausen family, from which the Zumbrunnen family originated.

This work is an especially important source because just a dozen years after its original publication, a major fire devastated the town of Altdorf in 1799, destroying many of the records to which Girard had access. Had he not written down this information in excruciating detail (and had Google Books not recently digitized it!) it’s likely that the full story of the Zumbrunnen and Attinghausen family would have been forever lost to time.

What follows is a sentence-by-sentence translation. (My own commentary, provided for context, is in parentheses and highlights like this) The original is on Google Books and any improvements to the translation would be welcomed.

Attinghausen, a parish village with a castle, the ruins of which can be seen some distance from the village of Altdorf, beyond the Reuss River in the Canton or Uri.(For a map of these locations, see here.) Attinghausen gave its name to one of the most ancient, most illustrious and most respectable of the Houses of Switzerland, long since extinct in its elder branch with the original name, but which has survived to to the beginning of this century in a junior branch. (He is referring to the Zumbrunnen!)

Without any dispute, the House of Attinghausen can be traced to the 1100s. The family had an inviolable attachment to the interests of the fatherland, and the churches and convents of the country are indebted to their largesse. The family has been known for 600 years, and all the historians of the nation have guaranteed the family’s presence back into antiquity. The archives show that the House of Attinghausen filled the first jobs of the Swiss Republic, even before its birth and emancipation from the yoke of the Holy Roman Empire and the House of Austria, and when Switzerland was controlled by the church. The sources are immune from criticism and the slightest suspicion. A certain mark of the family’s early grandeur is undoubtedly the title of Baron which it carried from the 12th century, unlike today when there’s an infinite number of titled families even in the dregs of people.(This paragraph hints at Girard’s political agenda of Swiss patriotism. It’s clear that despite his fascination with the history of nobles and their genealogy he had a healthy contempt for the nobles who were his contemporaries.)

There is no doubt that, if we had all the records which the insults of time have destroyed, we might witness the name of Attinghausen in the centuries in which it was first adopted.(There’s a debate over the origins of this family. Girard believes they’re an ancient family from Uri; the alternate theory is that they were colonizers from western Switzerland.) But we do not have earlier records than those for Werner, Baron of Attinghausen, who lived in 1189. This Werner is one of the founders of the House of Schweinsberg through Diethelm of Attinghausen, his grandson. And he is the founder of the Zumbrunnen, through his second son Walter who took the name of a castle that he inherited. He is also the founder of a third branch, Der-Frowen, but we do not know its junction with the other branches.(At this point in the original, there’s an overview of the Von Schweinsberg and Der Frauen families which I’ve translated here.)