Posted on July 18, 2017 by Josh Zumbrun
7 CommentsLeave a comment

Heinrich Zumbrun and Eva Lehr are the immigrant parents of the Zumbrun family in America. It is my belief that everyone who spells the family name Zumbrun or Zumbrum is descended from this couple. (People with the spelling Zumbrunn or Zumbrunnen are from branches of the family that immigrated separately.)

This is an overview of all the known records pertaining to this couple.

First, church records for a Lutheran Church in Schwegenheim, Germany show a large Lehr family, including a Maria Eva Lehrin, daughter of Sebastian Lehr and Anna Lehrin. In Germany at the time it was common for grammatical reasons to add an “-in” to female’s last names, so Lehrin and Lehr are the same family (as are Zumbrunnin and Zumbrunn).[1]

Schwegenheim is a small town in the Rhine Valley, a region torn apart by nearly a century of war and instability, exactly the sort of place that was a common source of immigrants to Philadelphia in the 1750s. Its small Lutheran Church was Evangelical.[2] The following records are pertinent:

In her marriage to Johann Heinrich Zumbrunn, she is identified only as Maria Eva W. David Degen. Only by tracking down her first marriage do we find the maiden name of Lehr. No Zumbrunns had previously appeared in these church records and it’s clear this was never their home town. Apparently born Johann Heinrich Zumbrunnen, he grew up near the town of Crailsheim, Germany and his family began shortening the name from Zumbrunnen to Zumbrunn in the 1720s and 1730s. An overview of the Zumbrunnen family in Crailsheim is available here.

The church records show that Johann Heinrich and Maria Eva had at least three children in Schwegenheim.

When recruiters traveled down the Rhine River to deliver the message about the wonders of Pennsylvania, it’s no wonder the message was appealing, considering the amount of death and sadness Heinrich and Eva must have encountered in their young lives. Heinrich is clearly recorded in the records of the ship “Brothers” that departed Rotterdam on July 31, 1754 and arrived in Philadelphia on September 30, 1754.

A full overview of these ship records is available here: Original Sources: The Passenger List and Ship Registry for the Ship “Brothers”. Heinrich signed his own name using a careful and formal script, showing that he had some degree of literacy.[6]

Immigrants typically left for these voyages in the spring, and traveled via river boats up the Rhine River to Rotterdam. The ship records only contain the names of men, but it’s all but certain that Eva traveled with Heinrich because they appear together in records almost immediately after arriving in Philadelphia. I have found no death records for two of their daughters, so it’s possible that Anna Barbara Degen (by then 7 years old) and Apollonia Zumbrunn (still a baby) also came with them.

Shortly after their arrival in America, Maria Eva Zumbrun is listed in the probate records of Daniel Merbadt of Berks County, Pennsylvania. She owed him 2 shilling and 6 pence, according to probate papers filed on November 16, 1754. I don’t know anything about Daniel Merbadt. The purpose of this debt is unclear. It’s far too small a sum to be borrowing for their journey (which would have cost between 600 and 1800 shilling). Perhaps immigration left Eva and Heinrich financially drained. Perhaps they borrowed some money to travel from Philadelphia to Berks County. 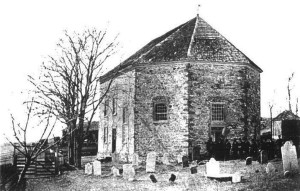 The old stone Zion Moselem Lutheran Church was built in 1761 when records show Heinrich was a member.

Some genealogies mistakenly state that Heinrich died in 1754. In fact, Heinrich appears to have formed a bond with two of the other immigrants on their ship:(Balthasar Reimer and Johann Wolfgang Mohring). All three names appear in the church records of the Zion Moselem Lutheran Church in Berks County, Pennsylvania.

Heinrich and Eva also had a son Johann Zumbrun, whose birth date is unknown, and who many researchers have presumed was born during the year of immigration.

The birth of Ana Elisabetha Zumbrun is the last appearance of Eva in any records I’ve found. I don’t know when she died. Heinrich appears in one final record that I know about. In 1761 and 1762, Balthasar Riehm (the spelling of this family name continually changes) and his wife Catherine Riehm administered the will of her father Johannes Leicht. 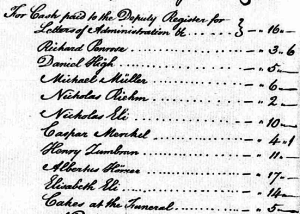 The records show that Johannes Leicht was a yeoman farmer, that is, one who farmed his own land. He was prosperous enough to have 60 pounds (or 1,200 shilling) of wealth to divide among his heirs after settling his estate. As part of the process of settling the estate, Henry Zumbrun (names are Anglicized in these records) was paid 11 shilling. The purpose of this payment is unknown. It’s not a large sum of money (the paperwork records that Balthasar spent about half as much money, 5 shilling, for “cakes at the funeral”). Still, it seems from this record that Heinrich was owed payment for some sort of labor he’d performed for Johannes Leicht.

This is the last record I’ve found for Heinrich and Eva. The Mohrings and Reams both moved to Frederick County, Maryland, over the next decade. Heinrich and Eva’s son Johann Zumbrun also moved to Frederick by the early 1780s. Johann Zumbrun is in the first Census of the United States in 1790, with an unknown adult man living in his household. It’s thus possible that Heinrich was still alive as late as 1790 and living with his son (he would be 73) but this is uncertain.

To date, there are no known will, probate or burial records for Heinrich or Eva. There are also no known land, tax or court records for Heinrich. This is somewhat strange because such records do exist for the Reams and Mohrings and many other families of the time. If you’re aware of any other records of Heinrich and Eva Zumbrun, please let me know!

Some Questions for Further Research

Sources
1) A good overview of naming customs in German at the time. You can see the prevalence of the “-in” suffix in this online list of the marriages at the Zions Moselem Church.

2) The Protestant church in Schwegenheim today has a brief history of the Schwegenheim Lutheran Church in the 1700s.

3) The handwriting is hard to read, but it’s fairly easy to make out Johann David Degen in the middle of the first line and Maria Eva Lehrin at the beginning of the bottom line. His father is identified as Johann Valentine Degen and her father as Sebastian Lehr.

4) In the third line you can see Johann Heinrich Zumbrunn. One especially interesting think is the handwriting. I might be making too much of this, but the records of Heinrich’s signature show the same distinctive swoops above the U’s. Heinrich probably wouldn’t have actually written these church records, but since the other ship passengers don’t use the same flourish, it seems like Heinrich could have picked up this style of writing from his church.

5) Apollonia Zumbrunnin. What happened to her?

6) It’s not surprising Heinrich would have omitted “Johann” when signing ship manifests. The first names of German-speakers in the Rhine Valley and Pennsylvania were their “saint names” or “Christian names” and they typically went by their “middle names.” Thus Johann Heinrich Zumbrunn and Maria Eva Lehr likely would have called each other Eva and Heinrich. And just like today, when prompted for their signature some people provide their middle names and others don’t, with no particular significance necessarily attached to the decision.

7)These records are digitized, in part, on FamilySearch.org. Apparently a microfilm of the originals is held at the Lutheran Theological Seminary at Philadelphia. 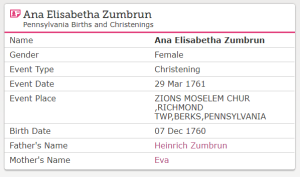