The Zumbrunnen Family in Lutheran Church Records in Baden-Württemberg

Posted on November 24, 2017 by Josh Zumbrun
4 CommentsLeave a comment 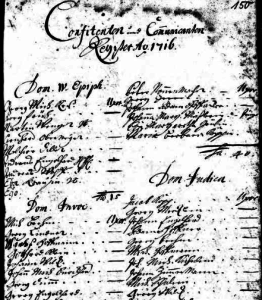 Beginning in 1716, the church kept a detailed handwritten record of attendees at church services. The first list here seems to be people who took communion at the Epiphany service.

In the early 1700s, a small Zumbrunnen family was living in Baden-Württemberg, the German state just to the north of Switzerland. This post is an overview of the records pertaining to this family found in the church book of the Lutheran Parish Waldtann, located outside the town of Crailsheim, Germany.

The handwritten records can be very hard to read. The surname appears to be written variously as Zumbrunnen, Zumbrunnenin, Zumbrunn, and Zumbrunnin. (German-speakers in this region added “-in” to women’s surnames in this era). Sometimes there’s a space after Zum and sometimes not. Later in the records, they tend to favor the shorter spellings. These records support the theory that the family was originally named Zumbrunnen and that this branch truncated the spelling in the early 1700s.

The records contain detailed attendance lists that appear to be the people who took communion at the major holidays like Advent, Pentecost, and so on.

Balthasar and Barbara appear to have been in the front row for attendance at Pentecost in 1726. Note her name appears to be written as Zumbrunnenin and she’s identified as a widow.

In 1729, for the first time, we find a new name in these records: Johann Heinrich Zumbrunnen. Johann Heinrich Zumbrunn was the immigrant ancestor of the Zumbrun family in America. He was married in Schwegenheim, Germany in 1749, but prior to his marriage, neither Heinrich nor any other Zumbrun was listed in their church books. Heinrich’s hometown was somewhere else. These records have finally revealed where. 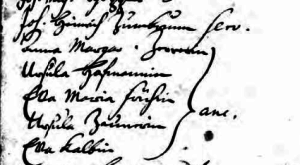 Joh. Heinrich Zumbrunn on the top line, below him is Ursula Zumbrunn.[2]

Heinrich Zumbrun would be about 12-years-old in 1729. He first appears in records in this year, because this is the approximate age Lutherans began taking communion at this church.[3]

In some of his early records you can see his name written pretty clearly as Zumbrunnen, but as the records go on the family shifts toward the spelling Zumbrunn. 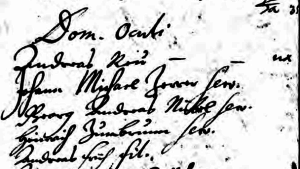 Heinrich is the fourth person listed on this attendance record from 1732.[5]

Other new family members begin to appear in the records. In 1732, there’s a Johann Georg Zumbrunnen.

The second name on the list: “Johann Georg Zumbrunnen Serv.”[6]

A cool observation is the similarity between the writing in the church lists and the way Heinrich wrote his own name upon signing the Oath of Allegiance in Philadelphia.

The first is Heinrich’s name in the church records; the second is his signature upon arrival in Philadelphia. While clearly written in different hands, they both write capital H’s that look like G’s or L’s, big swoopy concluding h’s, both write swoops over their u’s, and both insert a space after the Zum.

So what is the relationships of all these Zumbruns? There are enough baptisms and marriages in these records to make sense of it.

The church book has a lot more material that’s completely unindexed (several hundred pages, at least). There might be earlier church books too. The church archive in Stuttgart, where these records are kept, would almost certainly have more information. But the above records are enough to mostly untangle two family units:

I could not find a baptism record for Heinrich but his family was attending church in Waldtann by 1715, and so if he was born in 1717 as these records (and his immigration records) suggest, then he was born in Crailsheim, Germany.

Some Questions for Further Research

Footnotes
1)The attendance records have not yet been indexed, so you cannot search them with a text query. They are available on Ancestry.com if you have a paid subscription to the international records. The originals are at the State Church Archive in Stuttgart. There are four or five different church books that have been digitized into a single file on Ancestry.com. The church attendance records in Waldtann, referred to throughout, begin on page 150 of the Waldtann Church Book (page 799 of 1216 on the digitized microfilm.)

3) Here’s a useful guide to German church book handwriting. Two letters that are helpful to study are the “H” which looks more like an English “L” or “G” and the German “u” which was typically written with a swoop over it. You can often distinguish Zumbrunnen from Zimmerman because Zumbrunnen will have two swoops, and Zimmerman will just have a single dot.

7) It was common at the time, when a child died in infancy, to give a subsequent child that same name, like with the two Georg Michael Zumbrunns here. Heinrich Zumbrunn and his wife Eva Lehr also gave two daughters the name Anna Dorothea Zumbrun, after the first died young.